Wind, rain add to solemn atmosphere at U of T Remembrance Day events 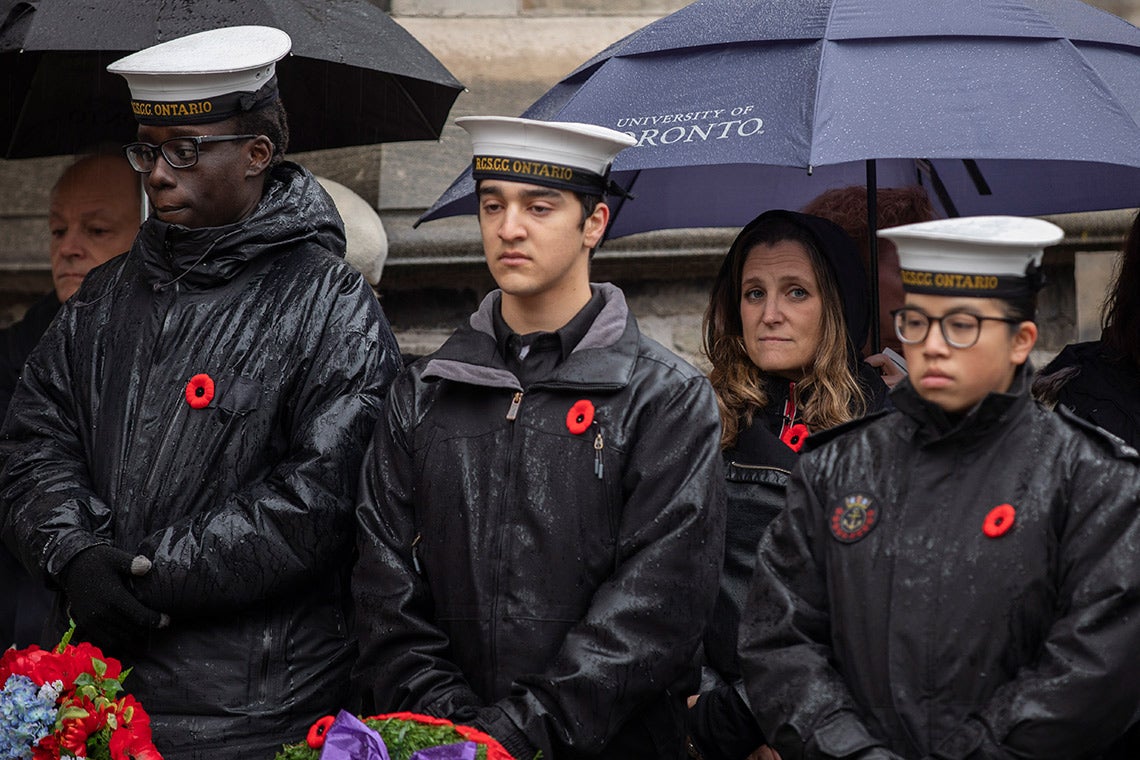 Foreign Affairs Minister Chrystia Freeland looks on during a service of remembrance at the University of Toronto's downtown campus (photo by Nick Iwanyshyn).

Despite falling rain and gusting wind, a large crowd attended services of remembrances held at the University of Toronto’s downtown and Mississauga campuses Friday.

The services were held in advance of Sunday's 100th anniversary of the armistice that brought an end to the First World War. Other services will take place at U of T over the weekend and on Monday.

Foreign Affairs Minister Chrystia Freeland attended the Friday service at Soldiers’ Tower on the downtown campus. The tower was built in 1924 as a memorial to those who served in the Great War.

The ceremony included the laying of wreaths and a recitation of In Flanders Fields, written by John McCrae. McCrae, who received two degrees from U of T, died on the battlefield in 1918.

Here’s how U of T marked its first day of Remembrance Day events. 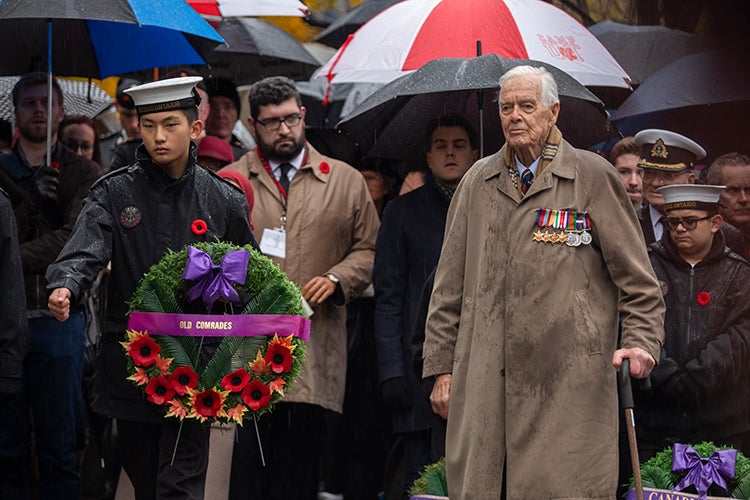 James O'Brian, a retired flight lieutenant, prepares to lay a wreath at the foot of the Soldiers’ Tower (photo by Nick Iwanyshyn). 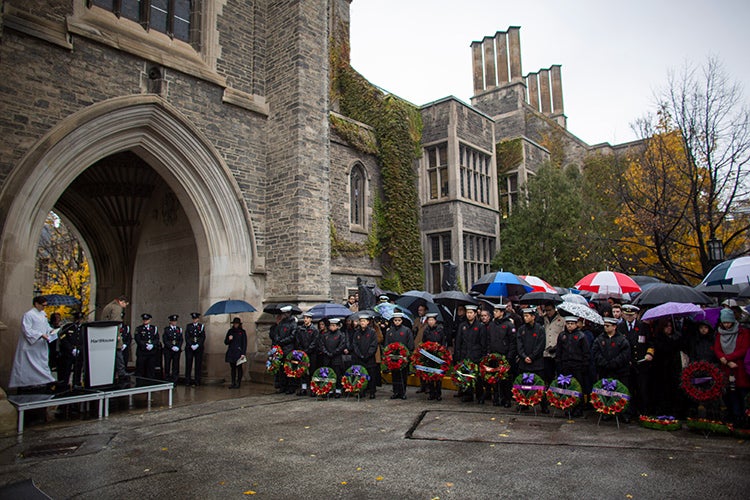 A large crowd braves the wind and rain during a service of remembrance on U of T's downtown Toronto campus (photo by Nick Iwanyshyn). 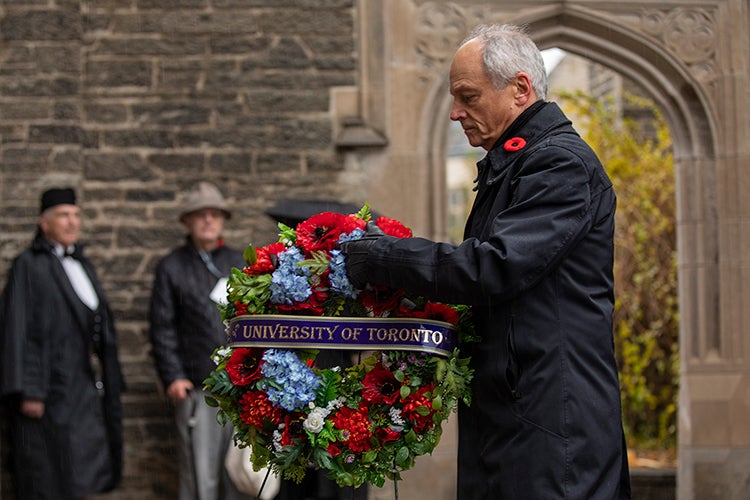 U of T President Meric Gertler lays a wreath at the foot of Soldiers' Tower (photo by Nick Iwanyshyn). 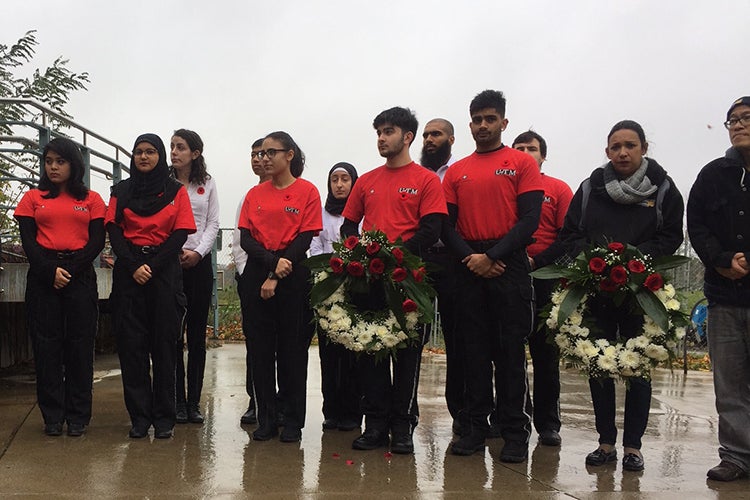 Student members of the Erindale College Special Response Team, a division of St. John Ambulance, participate in a wreath-laying ceremony at U of T Mississauga (photo by Nicolle Wahl). 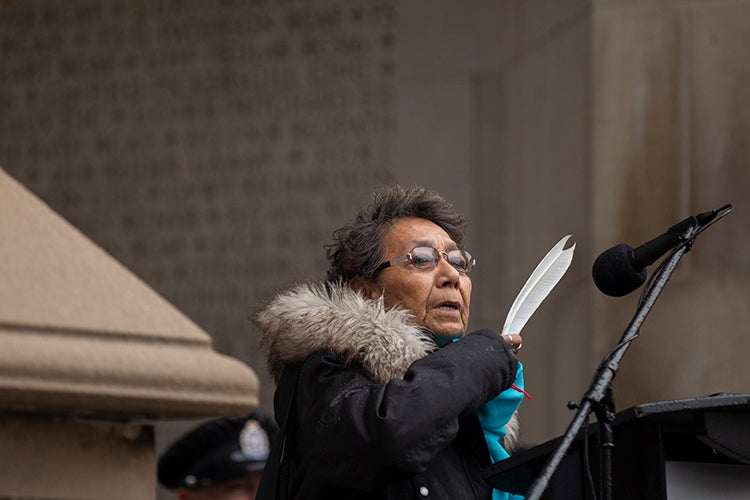 Jacqui Lavalley, a member of the Shawanaga First Nation, speaks during the ceremony on the downtown Toronto campus (photo by Nick Iwanyshyn). 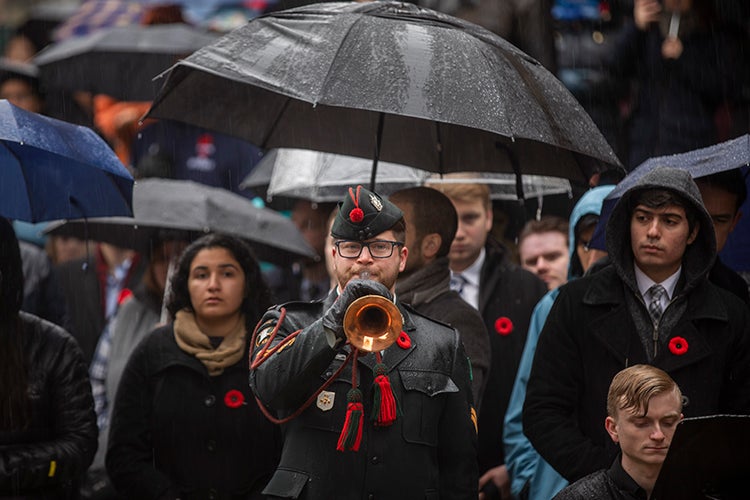 Cpl. Jonathan Elliotson plays The Last Post while attendees on the downtown Toronto campus look on (photo by Nick Iwanyshyn).